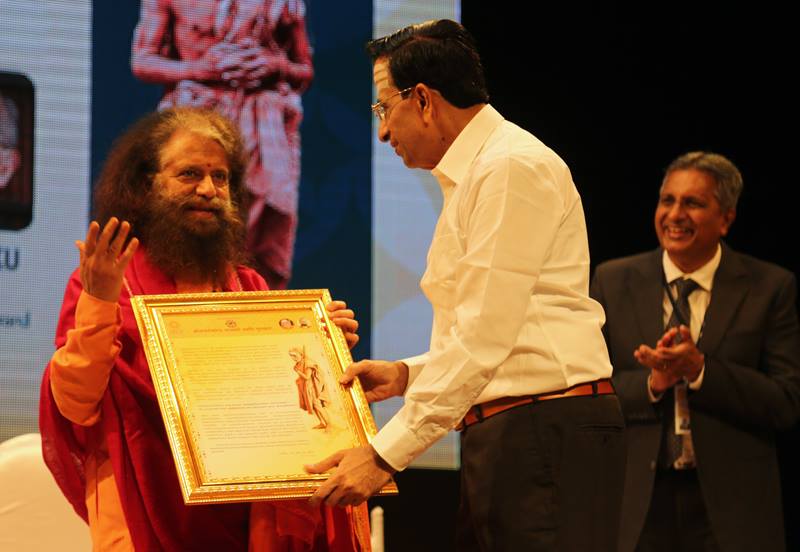 The award is given each year to select eminent personalities who have truly excelled in their individual fields and who have devoted their lifetime for the cause of this nation and Sanatana Dharma, to the welfare and well being of all. The Sri Chandrasekarendra Saraswati National Eminence Award is our way of paying reverential obeisance to the benevolent sage of Kanchi His Holiness Sri. Chandrasekarendra Saraswathi, the legend of humanity and to perpetuate His memory, mission and deeds for the present and future generations.

Thereafter the awardees were cited and Dr Manmohan Singhji was honoured for his great leadership as the former Prime Minister of India. It was shared that notably he was the first person of Sikh faith to hold this office and the first Indian Prime Minister since Pandit Jawaharlal Nehru to return to power after completing a five year term. It was shared that he is a great thinker, scholar and a talented economist, and said that Dr. Singh personifies the highest of probity in public life and is a shining example of selfless service above self, in the cause of the nation.

Pujya Swami Chidanand Saraswatiji was honoured for His exceptional leadership in selfless service to humanity, social upliftment & empowerment, especially towards environmental preservation, mobilising faith based action for a Swachh Bharat, improved WASH and interfaith harmony, especially serving tirelessly as the founder of the Ganga Action Parivar​, Global Interfaith WASH Alliance​ and being the inspiration behind many other multifaceted organisations. His tireless efforts to protect Hindu culture and tradition whilst adapting it in the modern times was shared, including His conception of the Encyclopedia of Hinduism, the first 11 volume compendium on Hinduism as well as protecting, preserving and promoting Hindu culture in India and abroad.

Dr VK Saraswat member of Niti Ayog is guiding India’s rapid development by harnessing technology at all levels. He was born in a Saraswat Brahmin family at Danaoli in Gwalior, who today he is one of India’s most gifted scientist and an accomplished researcher. It was shared that he is a rare combination of an innovator, technologist and visionary, he has held various positions of responsibility in defence research culminating in being the Secretary, Defence (R&D). He also served as Chief Scientific Advisor to the Union Defence Minister and was the former Chief of DRDO.

Prof. Manjul Bhargava, R. Brandon Fradd Professor of Mathematics at Princeton University and also holds Adjunct Professorships at the Tata Institute of Fundamental Research, the Indian Institute of Technology Mumbai, and the University of Hyderabad is one of the central figures in the area of pure Mathematics in the world. He became the first person of Indian origin to win the Fields Medal, popularly regarded as equivalent to the Nobel Prize in Mathematics. He has been keenly engaged in improving the standards of quality education at all levels in the country– pre-school, school, higher education and professional and vocational education. He received the award on the day coinciding with the 132nd birth anniversary of the legendary Mathematician Shri. Srinivasa Ramanujan, celebrated as National Mathematics Day.

“Truth is high, but higher still is truthful living. God’s name, according to Sikhism, is said to be truth,” said former Prime Minister Dr Manmohan Singh, invoking the words of Guru Nanak Dev, while accepting the award. On the occasion Dr Manmohan Singhji said that this not an award that I am receiving simply with my hands but also receiving the blessings from my heart.

Pujya Swami Chidanand Saraswatiji – Muniji​ said, “It’s wonderful that today on National Mathematics Day, Dr Manmohan Singhji, Missile Man Dr VK Saraswat​ji, Mathematician Manjul Bhargav and I, whom Pujya Swamiji revered to as Muniji, receive the blessings of Mahaswami ji. This day of Ms is magical and memorable. On the occasion I fondly remember being together with Mahaswamiji many years ago at the Kumbh Mela doing Aarti together. It his blessings at that time for the conception of the Encyclopaedia Of Hinduism that has seen its great success. This award is not merely a medal or a frame but it’s a model of how we should frame our lives to be in the service of humanity and for the welfare of all. Those being recognised today are examples for how each one of us can also lead by our divine example.” He concluded the evening with a beautiful pledge to be the change we want to see in our world and to protect water, abating the grave water crisis we will soon face in just 10 years having just half the water we need.

...filled with beautiful photographs and inspirational quotes for each day of the year.

Come Home to Yourself

Sadhviji covers the most pertinent issues affecting all of us – how to discover inner peace, find love, let go of anger, know your purpose, and connect with God.

“If we set the divine example, others will follow.”

“The best way to honor God in our lives is through serving humanity.”

“Prayer is the broom which sweeps out our heart, making it clean and divine for God.”

“Forgive, forget, and move forward. This is the only way. It is not enough to forgive and forget. One must also move on.”

“Travel light on your journey in life. Your desires and expectations are heavy baggage, which slows you down and thwarts your progress. Let them go.”

“Do not wait for miracles. You ARE the miracle. Never forget the miracle of yourself!”