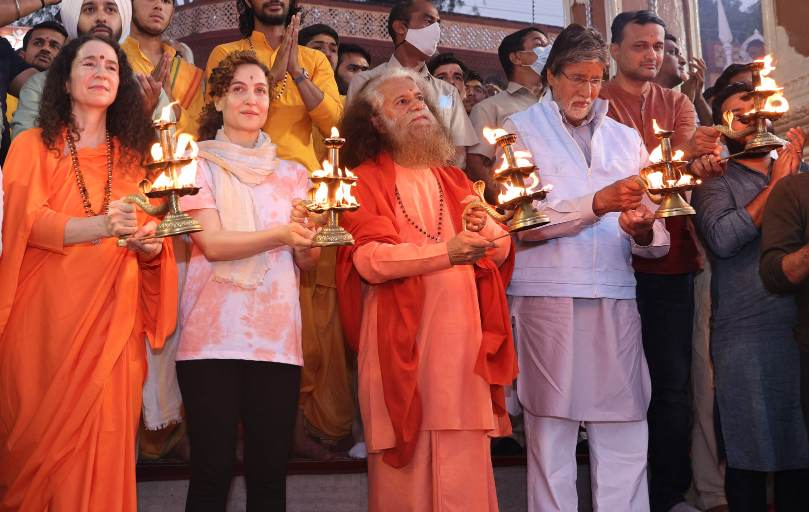 Whilst shooting for his new film Goodbye, Super Star and the Legendary Actor Amitabh Bachchanji along with Director Vikas Bahl, Actress Elli Avram, as well as the rest of the cast and crew of the production joined for a special meeting with HH Pujya Swami Chidanand Saraswatiji, Pujya Sadhvi Bhagawati Saraswatiji and performed the world-renowned Parmarth Ganga Aarti.

During the evening session Pujya Swamiji shared, “No doubt Amitabhji is a living legend in the Indian film industry, but he is also deeply dedicated to his country and has made his nation and its people proud. Amitabhji has inspired generations and will continue to inspire generations to come with his incredible gift and excellence in his craft. Amitabhji hails from the banks of Mother Ganga, from Prayagraj, and to many is still endeared as Chora Ganga Kinare Wale and today in the Yoga Capital of the World, on the holy banks of Maa Ganga in Rishikesh it is so apt to welcome him Home.” Lauding his lifetime of achievements Pujya Swamiji added, “As the son of legendary Shri Harivansh Rai Bachchanji, celebrated poet, who has also lived an exemplary life, he has joined his family’s rich history and legacy in their important role in making India and Indian culture proud!”

Speaking on the occasion and welcoming the actor, Pujya Sadhvi Bhagawatiji shared, “This sacred land is so deeply transformative. Whether you come here simply as a pilgrim or as a personality like Amitabh Bachchanji, the sacred soil has the power to touch and transform us. I am so glad to welcome Amitabhji to his Himalayan home and so glad to have many of the scenes from his next film shot here in Rishikesh. I am sure the mere darshan of this sacred pilgrimage will inspire countless many.”

Mr Bachchan received a sacred Rudraksha sapling, an Angvastra and was given a beautiful garland by Pujya Swamiji and Sadhvi Bhagawatiji during the Aarti, honoured for his work and his divine example. He also met with Pujya Swamiji and Sadhvi Bhagawatiji to perform the sacred water blessing ceremony and was offered a beautiful Lord Shiva Murti as his gift to take back with him.

With the completion of filming for Goodbye in Rishikesh and at the Ashram, Pujya Swamiji recognized the importance of Uttarakhand in India’s powerful film industry, sharing,”So many films have been shot in Uttarakhand. Our Uttarakhand is the best destination for films. It’s the Best Spiritual Destination, the Best Wildlife Destination, the Best Adventure Destination. And the holy valleys of the Himalayas and the holy banks of Maa Gangaji are Best Destinations themselves. Uttarakhand is now becoming one of the most favorite destinations in the world. And in order to keep our beloved state as the best destination in the world, we have to keep this state green and clean, and we must keep the culture and rites alive in the mountains.”